“Script?” commented the woman sitting next to me after the relevant credit flashed up on the screen. She could probably have said the same about many of the others. Even I raised an eyebrow at “Supporting Cast”. The fact is that The Turin Horse is a film in which almost nothing happens that will bore most audiences to tears. By “The Third Day”, the title frames seemed to have become a running joke. By “The Sixth Day”, everyone had stopped laughing. It reminded me of going to see Melancholia – half the audience had been long asleep by the time “Part Two” came around, and a good portion of those still awake let out audible groans.

You can’t please everyone though and, as with Lars Von Trier, you get the impression that Béla Tarr isn’t really trying. The Turin Horse is intended to be the culmination of his career but it will only ever appeal to a dedicated few. “So what kind of film is it?” asked my flatmate when I came in. “Action?” “No,” I replied, “the opposite of that. Inaction!” If you were to attempt to place it in a genre, that is accurate as you are going to get. 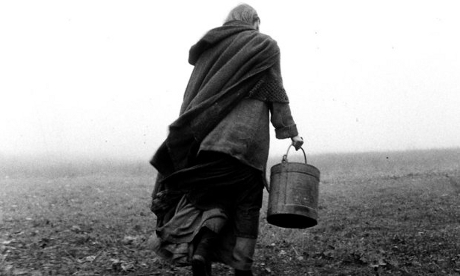 Shot in a bleak-looking black and white, the film is made up of only 30 takes and, visually, it is mesmerising. Watching it is like being taken around an exhibition featuring a hundred astonishing paintings by a great artist, all depicting approximately the same thing. It is relentlessly repetitive – the characters move with a rigid circularity – but the subtle changes that take place between each scene are all the more noticeable for it. So intimately are certain actions depicted that even the slightest modification can be startling. The attention to detail and dedication to every shot is remarkable, while the set is flawlessly constructed to facilitate Tarr’s cinematic vision.

The starting point, as we are told but not shown, is the apocryphal story of Nietzsche’s descent into madness. Seeing a cab driver brutally whipping his stubborn horse in Turin, Nietzsche goes up to him, throws his arms around the horse’s neck and sobs violently. He collapses, is taken home and never recovers from the incident. Tarr never quite leaves Nietzsche behind, but chooses to follow the driver and his horse back to their meagre rural existence, oblivious to the significance of what has taken place.

The driver lives only with his daughter and they come into contact with virtually nobody else. Their lives revolve around looking after the horse, keeping the fire going, fetching water from the well and eating boiled potatoes with their hands. At the mercy of the elements, the interminable gale, they struggle on, doing the same thing day in day out. Can this be called existence? A man arrives to buy pálinka and delivers a lengthy monologue on the degradation of the world. Gypsies appear from over the hill to steal water and deliver an obscure book. As far as the plot goes, that’s about it. And you get the impression it’s been an eventful week. They live to toil on the land, to suffer in nature’s fearful symmetry. This is no pastoral – there is not a shred of romance – but the characters are not condemned either. Their torture is beyond their control, coming perhaps from God, perhaps from the outside world. 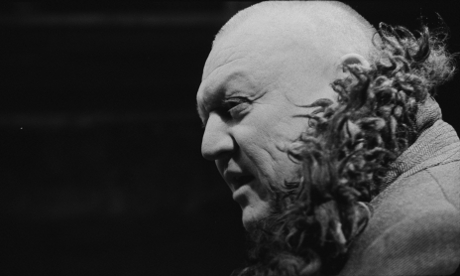 The narrative ultimately has devastating consequences, which are hinted at rather than acted out. The horse gradually deteriorates as the gale gets stronger, but it is only towards the end that we realise the significance of these events. It is a deceptively simple film with a fin de siècle narrative so original you might miss it altogether. Darkness descends on the house but in the end we are shown the light. The final scene is breathtaking.

The Turin Horse is a film of rare intensity and scarcely believable focus. Backed by Mihály Vig’s majestic score, which has a dramatic intensity akin to Clint Mansell’s Requiem for a Dream, it rewards whatever attention you are willing to give it. If it does prove to be Tarr’s last film, it is certainly not a bad one to bow out on. Nobody would dare to question the director’s credit, however difficult they found it to sit through.